Discussion of NIH Workshop by NEMSN Board Members 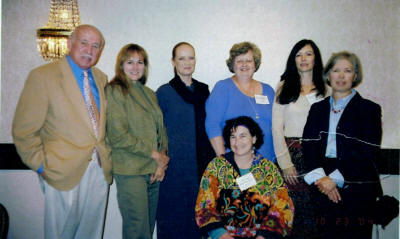 From left to right-

Julie Ann Allender.  Michael Bird was not present for photo.

The first evening NEMSN hosted a reception for the conference speakers which provided an opportunity for everyone to get acquainted.

Joe said, “Michael Bird and I met with Congressional staff members in an effort to request research funding for EMS.  We can be very proud of NEMSN because we have been pro-active in getting things accomplished."

Michael suggested that because our group is so small and our funds our dwindling that NEMSN may want to become connected with a larger similarly related group to make future progress.

Robin Burkin, our Web Master said: "Being able to meet one on one with the scientists gave us a chance to make our illness personal. One of the subjects I found most interesting was the explanation as to why none of the animal models had come down with EMS. It seems they tested contaminated batches of LT on both mice and monkeys but neither came down with EMS symptoms. Their theory is that humans metabolize the product differently than animals.”

“Another idea I found interesting came from the FDA. Their representative thought that EMS was not caused by contaminants but by ingesting much larger amounts than normal. This could cause our bodies to produce a reaction as if there were an infestation and send out Eosinophils to deal with it.”

“I also wondered why there was no up to date registry of people with EMS. Apparently, due to the stigma of AIDS, new laws were enacted to protect personal privacies. Therefore, no official government records can be maintained,” said Burkin.

Most of the conference dealt with the disease’s history and was old information to NEMSN. It was good for the agency heads of the NIAID and NAIMS within NIH as well as CDC and FDA to have the opportunity to review the information together aiming at preventing new epidemics of eosinophilic diseases, which might occur in the future. The review, however,  helped to remind the scientists to be on the alert for food “poisonings”  especially in light of the age of terrorism.

The purposes of the meeting set by NIH were threefold:

1.  To review what has been learned about EMS

2.  To determine steps that might be taken to prevent future epidemics

3.  To identify gaps in our knowledge and opportunities for future research.

Interesting Highlights of the Conference:

Some NEMSN members have pointed out that although there are many symptoms in common EMS does not have the "11 of 18 tender points" characteristic of the FMS patients.

Jinx Engstrom referenced an article from Medicinenet: "Therefore, fibromyalgia is different from many other rheumatic conditions (such as rheumatoid arthritis, systemic lupus, and polymyositis). In those diseases, tissue inflammation is the major cause of pain, stiffness and tenderness of the joints, tendons and muscles, and it can lead to joint deformity and damage to the internal organs or muscles." Jinx stated that she has always felt EMS symptoms were closer to MS than other illnesses”

The conference was informative although very little attention was paid to NEMSN's request to deal with effective treatment for the chronic phase of EMS. Dr. Julie Ann Allender commented on this: "What I felt sad about was realizing that the conference was really for "others". Those of us who are still alive and suffering the ill effects from L-T are not in the picture. We will never be looked at as patients who have the potential to heal. Everything seemed to lead to "the next time."

The physicians were astonished to see portion of Julie Ann’s legs with blotches of red, irritated blisters proving without a doubt that many early symptoms are still plaguing us and getting worse.

Karen Tonso presented the research conducted by NEMSN in 1999 and Janet Vaught addressed the issue of other health food supplements which continue to cause illness.  They both represented us well and we thank them. (Photo by Janet Vaught)

Results of the NIH Meeting in Bethesda, MD October 2004

Two of our members, Michael Bird and Joe Hayes, met with Senator Specter and Representative Hoyer  requesting funding for EMS in their upcoming appropriations bill.
In the conference report on H.R. 4818 is the following language:

"The conferees encourage NIAID, other Institutes within NIH and other appropriate federal agencies to provide support for the study of Eosinophilia Myalgia Syndrome (EMS) and other immune mediated diseases that manifiest symptoms like those of EMS. These systemic illnesses require new approaches, such as systems biology, to understand root causes of disease onset, to assess treatment options and to understand clinical and epidemiological aspects. EMS and EMS-like diseases have afflicted thousands, remaining incurable, and continue to be difficult to diagnose."

The above language was requested for inclusion in the conference report on H.R. 4818, the omnibus FY2005 appropriations bill, by Senator Arlen Specter (R-Pennsylvania) and Representative Steny Hoyer (D-Maryland).

The conference report language helps in several ways. It compels NIH to report back to House and Senate appropriators on any action they take or propose to take in order to carry out the intention of the language. It also serves as a marker for grant proposals submitted to NIH and its Institutes that suggest carrying out research efforts regarding EMS and other immune mediated diseases. Finally, it gives us some language to return to the appropriators with progress reports and requests for continuing or modified language in the future (this should be done by the end of February).